This article explains the 5 Things to Consider Before Buying a VR Headset, It helps you find the right virtual reality (VR) headset for your gaming or entertainment needs, whether you already have a powerful gaming PC or you need a VR headset that will work on its own without any additional hardware. 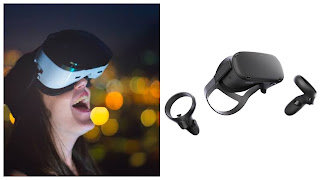 Before we go deep into this topic, let’s explain what a VR Headset means:

What Is a VR Headset?

A virtual reality headset is a head-mounted device that provides virtual reality for the wearer. VR headsets are widely used with video games but they are also used in other applications, including simulators and trainers.
The headset covers your eyes and contains either two displays or a single display that’s split in half and shows two different images. Each image is shown to one of your eyes in a manner that prevents your eye from seeing the other image. Since the image shown to each eye is from a slightly different angle, your brain interprets the images as three-dimensional.

Below are the things to consider before buying a virtual reality headset to ensure you make the right choice and get the best value for your money.

Before buying a VR headset, You must consider your budget, The price for a VR headset can range anywhere from $10 to $1000. Therefore, when considering the price, the kind of features you need is the brand, the freedom level, and many other elements.

You can consider buying the most expensive devices, that is if you’re ready and you are capable of buying it. The best thing about it is that you get better comfort, quality, and features. That’s not to say you won’t find the set you desire on a budget, but you’ll need to lower your expectations.

When picking a VR headset to buy, you must consider the resolution, Remember, virtual reality is all about your vision the clearer you can see the better the experience.

Before buying a VR headset, it is always advisable to try it out to be sure about the resolution, and that is because the fact that VR brings images closer to your eyes means that you need a higher resolution.

Apart from considering the resolution, consider the field of view as it also impacts your vision. A wider field of view gives you a realistic view of the virtual world, while a narrow one doesn’t.

Should a VR Headset Be Wireless or Wired?

When you connect a VR headset to a VR-ready PC, you can do so with one cable, several cables, or a wireless connection. Some VR headsets require an HDMI cable, data cable, and power cable, while others only require a single USB-C cable to transfer everything. In either case, the cable needs to remain connected at all times. That can result in tangling during gameplay, especially if you’re walking around the room while you play.

The essential features to consider in a VR headset is the Sound and display, Without these two features experiencing the virtual world is impossible.

There are two things to consider in the VR headset display , which is the built-in or external. A headset with a built-in display is expensive but comes with a high resolution.

Buying a headset with built-in sound is being convenient, it means you won’t spend on external headphones, thus less costly. Such headphones also come with a headphone jack, which means you can use headphones whenever you want.

When considering which VR headset to buy, it might be worth pausing to think of whether you’d prefer a standalone, PC, console or smartphone VR experience. This decision might make or break your whole experience.

Standalone VR:  Standalone virtual reality headsets are wireless, as it doesn’t require a PC or a smartphone to deliver a VR experience. The self-contained headsets (made popular by releases such as the Oculus Go) include built-in processors, GPU, sensors, battery, memory, displays, and more.

Standalone VR is also described as all-in-one headsets, Oculus Quest 2 is an example of a standalone headset that ‘ll give you a decent and portable VR experience without the need to purchase add-ons.

PC VR: As the name implies ‘PC’, you will need a PC nearby in constant connection to the headset.

A professional PC VR requires a PC and a specially equipped premises where the act of immersion in virtual reality will take place. Among such are HTC Vive and Oculus Rift headsets. They have some great capabilities in terms of hardware, However, the PC in question has to meet with certain specifications (which generally means purchasing a high-end computer).

Console VR: PlayStation VR is the leading option when it comes to this particular segment. PSVR headsets work with PS4 and PS5 consoles and feature an extensive gaming and movie library. A particular draw might be the exclusive titles offered by Sony like Resident Evil, Blood and Truth and Iron Man VR.

Smartphone VR: Out of all of the types of VR, these are by far the easiest way of entering a virtual experience (and also a cost conscious choice). All you need is slide your smartphone into the headset as long as they fit inside the VR headset. The average screen size range indicated by manufacturers is 4 to 6 inches. However, these headsets can’t run the vast majority of VR assets, including interactive VR content and games.

As seen above, Picking the right headset for VR can be challenging, There are different features to consider from resolution to price and brand. A correct balance between these features means a better viewing experience for virtual games and movies.

Remember, it is important to try out a few options before choosing one that fits your needs.