Android phones are fixed with a different types of sensors that turn a simple device into a smart device or what we call a Smartphone. Hackers can make  use of these sensors to log your keystroke, put on the camera, or record audio. Thankfully, with Android 10, Google has resolved this difficulty by introducing a new feature that enables you to disable all sensors in Android with one tap. 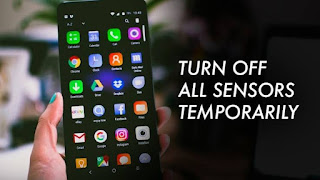 This article explains how to turn off sensors on Android by tapping a single button. It also explains what’s affected when you do so.

How to Turn Off All Sensors on Android Smartphone

The choice to perform the aforementioned task is carried out through a Quick Settings toggle. However, the quickest way to switch off all sensors at once is with sensors off, which is a toggle you can allow through developer option. So follow these steps below to bring up the Developer options and hence the toggle to turn off all sensors on Android.

1.Go to the Settings page on your phone.

2.Then go to the About Phone section and click on Build Number 7 times.

3.This will come up with a toast message that You are now a developer. 4. So return to Settings, go to system and click on Advanced.

5. You should see the Developer Options there. Now making use of this option, we would turn off all the sensors on your Android device. Follow along to the next step.

1. Once you are in the Developer Options, go to the Quick Settings Developer Tiles option.

2. Once you are there, you should see the Sensors Off option. Enable that toggle. 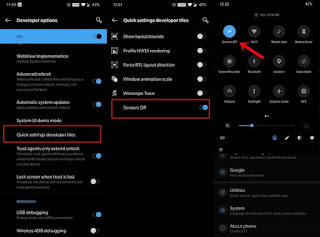 3. As soon as you do so, you should now see the Sensor Off toggle in the Quick Settings panel.

4. Just click on it once and it will disable all the sensors, which includes the gyroscope, proximity sensor, compass, accelerometer, and others.

What Does ‘Sensors Off’ Do?

Switching Sensors Off to the on position will activate this function, which turns off all sensors. Which means the microphone, camera, accelerometer, gyroscope, proximity sensor, magnetometer, and more can’t be accessed by the phone or your apps.

Here are some examples of what that means:

If you open it to take a picture or video, The Camera app will crash and other apps that need the camera might display an error.

In Conclusion, Introducing the Android 10 has revealed a world of new possibilities, as it gives excellent additional features by which you can easily customize the interface of your Android phone the way you wish. With the introduction, Google has not only improved the features and security and privacy of the operating system, it has also introduced hidden features and the turn off all sensors on your Android phone which is one of those hidden features that can help you to increase the privacy factor that can come in as a great handy feature.