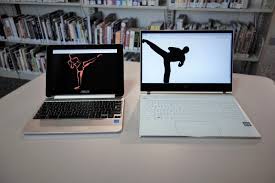 Choosing between a laptop or a Chromebook? There are a few key differences you should know about, and which one is better basically depends on your individual needs. Read on to make an informed decision about what machine works best for you.

Chromebooks are a new type of computer designed to help you get things done faster and easier. They run ChromeOS, an operating system that has cloud storage, the best of Google built-in, and multiple layers of security. Learn more about switching to a Chromebook.

Google claims that, unlike ordinary laptops, a Chromebook will boot up in 8 seconds and resume instantly. Users can also connect to the web instantly when they need using the built-in Wi-Fi and 3G. They can access apps, games, photos, music, movies, and documents. Cloud saves these files. Therefore, the users do not need to worry about backing up files. Furthermore, Chromebook has security features, that will eliminate the need for buying and maintaining anti-virus software. Also, it is claimed that the Chromebook will last a day on a single charge. Overall, it provides a large number of web apps including games, spreadsheets and photo editors.

A laptop computer, sometimes called a notebook computer by manufacturers, is a battery- or AC-powered personal computer generally smaller than a briefcase that can easily be transported and conveniently used in temporary spaces such as on airplanes, in libraries, temporary offices, and at meetings.

Most components of a laptop are made in a smaller size and with a lower power consumption to make them suitable for mobile use. Other than that, the laptop manufactures design the CPUs to save power and to produce less heat. Furthermore, laptops are specific to the laptop model. Most functionality is on the board itself. Therefore, it minimizes the use of expansion cards. Currently, laptops are consisting of 3–4 GB of DDR2 RAM and comprises 13’’ or larger color displays based on CCFL or LED lighting.

Difference between Chromebook and Laptop

The operating system is the main differences. Usually, Laptops run on Microsoft Windows or Mac OS which is a full-fledge operating system designed for all kinds of stuff. Chromebooks, on the other hand, run on Google’s Chrome OS, which is basically the stripped version of its Chrome web browser.

Chrome OS is basically Chrome web browser with some added functionalities and it relies on Google’s own services such as Gmail, Maps, Docs, Drive, etc. Any laptop with a Chrome OS is a Chromebook. It doesn’t need heavy processing power or a lot of RAM like laptops to function. Instead it’s cloud-based, meaning applications and programs are stored in cloud.

Chromebooks are designed primarily for online use, so specs don’t matter much as they do to Windows laptops. As everything is stored in cloud and files are stored on Google Drive, they don’t require disk drives. Instead, it augments storage with SD cards or USB cards if necessary. Laptops have disk drives or high-performance SSDs for storage.

The Microsoft Office suite cannot be installed on a Chromebook. Instead, you can use Microsoft’s own cloud-based Word, PowerPoint, Outlook, Excel, and One Note on a Chromebook. Chrome’s native Google Docs and Sheets are the better alternatives for Word and Excel. Unlike Windows, Chrome OS doesn’t allow you to download applications; instead it relies on web apps.

Chromebooks only work with Google Cloud Print-ready printers, it cannot be directly hooked up to a printer via a USB port or Wi-Fi network. Instead, you have to route your print jobs over the web using Google Cloud Print.

Chromebooks are not equipped to run your favorite PC games like Call of Duty, Need for Speed, etc. Laptops, on the other hand, can handle games quite well with the exception of AAA game titles which would require ultra gaming laptops.

Summary of Chromebook vs. Laptop

The main difference between Chromebooks and laptops is the operating system. While laptops run on the most popular operating system Windows, Chromebooks run on web-based Chrome OS, which is basically a skinned version of the Chrome browser with some added functionalities. While both look just the same, on the surface, they have significant differences in terms of specs and performance. One of the many aspects that clearly separates a Chromebook from a laptop is that it makes extensive use of the cloud and is primarily designed for online use. Chromebooks which entered the competition not too long ago, is not for everyone.

Types of Programming Languages and What They Do