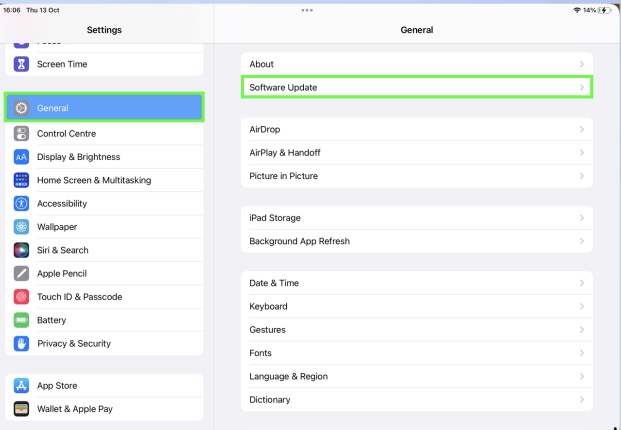 This article explains how you can manually update your iPad while also explaining how you can automate the process so that it becomes much less of a hassle. Here’s how to update an iPad.

1. Launch the Settings app on your iPad, click General and then select Software Update.

2. Then you will be directed to the Software Update page where you may see that an update is available (if not, you will be told that iPadOS is up-to-date).

4. Clicking Automatic Updates will give you ways to quicken the Software Update process. For instance, you can toggle Download iPadOS Updates to on this will make sure that updates are ready and waiting for install.

If you switch on Install iPadOS Updates then you will be prompted to update your iPad, you won’t need to keep checking the Software Update page.

You may also want to switch Security Responses & System Files. Doing so will make sure that system vulnerability patches will be pushed to your iPad. You will need to restart the iPad to complete the installation of these.

5. However, you have just tapped Download and Install, you will need to input your iPad passcode.

6. At this point, you need to agree to the terms of conditions so tap Agree, then tap agree again. Before the update starts downloading, check your iPad is connected to Wi-Fi it’ll save you a heap of data.

7. Once the update has been downloaded, click Install Now. The update will install and your iPad will restart.

It can take a while so be patient. It’s a good idea to charge your iPad during this process.

What Do I Do if My iPad Won’t Update?

There’s no way of updating an iPad to a version of software the hardware doesn’t support.