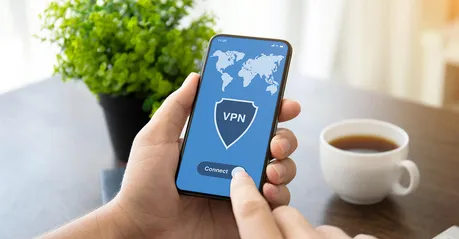 A virtual private network (VPN) is a tool that hides your geolocation and protects your privacy while you’re online. It does this by creating an encrypted tunnel from your home network to a VPN provider’s server.

A VPN reroutes your internet through a server address with a different IP than your own. That way, no one online can trace your internet activity back to you. A VPN also encrypts your internet data to protect your personal information.

VPNs aren’t just for desktop computers, though. All sorts of devices from iPads to smart TVs can benefit from a VPN connection. If you’re the type of person who handles your finances or does business online using a mobile device, it’s wise to get a VPN to protect yourself.

This article will show you how to choose and install a VPN on your iPhone.

How to set up and use a VPN on your iPhone

Setting up and using a VPN on an iPhone or other iOS device is generally a quick and easy process. The following steps show how to set up a VPN with the NordVPN app, but you’ll follow very similar steps to set up just about any VPN on your iPhone.

1. Launch the App Store and look for the VPN you want to use, then select Install.

If you don’t have an account, then you’ll need to create one.

3. Allow or don’t allow notifications from the app. Now your VPN should be ready to connect and protect your iPhone’s connection.

4. Finish your setup by allowing the app to add VPN configurations.

5. You can search through a list of NordVPN’s server locations or choose a location from a map display. Once you’ve found the server location you want to connect to, just tap on the location or hit the Quick Connect button.

6. Once a connection is established you’ll see Pause and Disconnect buttons for the location. If you want to change your VPN protocol or other VPN settings, you may have to turn off the VPN connection. Then, you can establish a new encrypted connection with one of the other VPN protocols available to you.

How to Change VPN Settings on an iPhone

VPN settings can be changed in the Settings app. Once it’s open, navigate to General > VPN & Device Management > VPN. This will display a list of all installed VPN apps.

Once the list is open, you can switch services by clicking the desired VPN app. or by tapping the Information icon to see VPN details.

Is iCloud Private Relay a VPN?

Apple’s iCloud Private Relay, which is still in beta (but available to iPhone and iPad users), is a free service that protects unencrypted Internet traffic.

It provides some security benefits similar to a VPN, as it can safeguard unencrypted data and will help combat websites that track users through the use of cookies.

However, iCloud Private Relay only protects Safari web traffic. That means the service can’t protect traffic in other browsers. It also won’t help circumvent regional restrictions by connecting through a server in another country or region.

Can I Install Multiple VPNs?

It is possible to install multiple VPNs on an iPhone. The instructions for installing the app and configuring the new VPN service remain the same.

It’s not possible to use multiple VPN services simultaneously, so you’ll need to switch between them. However, you can use Apple’s iCloud Private Relay simultaneously with a VPN.